The DB4 features a Loop record engine with channel EQ filters, intended for corporate or DJ use.

The heart of the Xone:DB4 is the powerful Quad FX Core DSP engine, enabling each channel to have its own FX bank and BPM detection system, which automatically adjusts all time-related FX and loops to the tempo of the music.

There are 5 basic studio quality FX types optimised for DJ use, comprising delays, reverbs, modulators, resonators and damage, plus each FX type has a patch library of different effect variations that can be assigned to the relevant control.

Each FX bank has a dedicated expression control and a rotary pot to set the wet/dry level, whilst further effect tweaking can be performed using the global controllers in the FX master section.

In addition to the FX, each channel has a built-in looper, with selectable loop length from 1/64 beat to 4 bars using the rotary encoder.

No matter what loop length is selected, the Xone:DB4 will always record the maximum of 4 bars, so the loop can be expanded or shrunk at will. With an intuitive layout similar to the industry standard Xone:92, there are also two filter banks on either side of the main mix channels.

Each music channel can select any of the available stereo audio sources:

Additionally, the Mic/Auxiliary channel can be routed through channel 1 for further processing.

Each music channel has a 3-band EQ that can be configured as standard asymmetric EQ (+6/-25dB), total Kill (+6dB/OFF with a 24dB/octave slope), or reconfigured as a High-Pass/Low-Pass filter system with adjustable resonance.

The EQ knobs incorporate an illuminated pointer that changes colour as a visual aid to show which type of equalization has been selected.

There is a Mic/Auxiliary input to the left of the main mixer section, providing 2-band EQ, gain, cue, and mix level. This can also be routed to channel 1 if you wish to add FX to this channel. To the right of the main mixer is the master section, with main mix level, booth level, and headphone monitoring system.

The OLED display is clearly visible even in bright sunlight, and displays each channel FX selection and current BPM, as well as being an easy and intuitive interface for the Menu set up functions.

The mixer offers many user defined settings, such as meter mode, BPM range, USB audio routing scheme, display brightness, in addition to the extensive built-in FX library, and these settings can be saved to a USB key for recall on another unit, such as in a fixed club installation.

There is a built-in, multi-channel USB2 soundcard allowing replay and recording from computer-based audio software for 4 stereo sends and 4 stereo returns.

All controls (except Mic and Phones level) send MIDI data but the mixer can double up as a MIDI controller via the MIDI shift button, which allows the Loop and FX selection controls to send MIDI data without changing the mixer settings.

“The Xone:DB4 is a truly ground-breaking mixer and by far the most advanced product that we have designed. Every feature has been meticulously researched with a view to offering DJ’s ultimate creativity,” comments Xone design manager, Andy Rigby-Jones.

“Based on the iLive pro-touring FX system, we developed FX algorithms with BPM conscious parameters and tight spectral control, customised to perfectly fit the DJ environment. As the loops and FX are automatically synchronised to the tempo of the song, it is very easy to build some amazing grooves and soundscapes without problems of latency, low fidelity and the general hassle often associated with using software and laptops.”

“Our digital design team has done an incredible job to ensure that this is one of the most innovative and exciting DJ mix tools to date.” 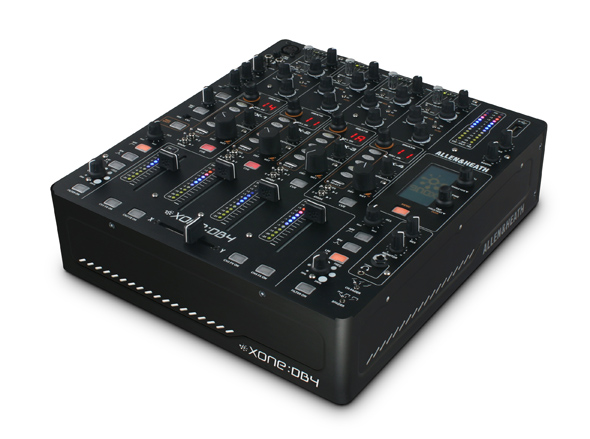 Four veteran sound engineers to highlight the importance of paying attention to and understanding every component in a sound system signal chain - join ...read more →

In Episode 66, front of house engineer Drew Thornton joins the hosts to talk about his new YouTube channel, A Sum Of Two Busses. ...read more →