The iLive was chosen to mix performances of opera, musical theatre, a military band, and much more.

The evening was also narrated by actor Robert Powell, featured the marching band of the Brigade of Gurkhas, and included a fireworks and cannons finale.

“iLive was the obvious choice, as its flexible, distributed audio architecture makes it easy to build high capacity systems within a small footprint.”

The Royal Philharmonic Orchestra was mixed on a separate system by specialist classical sound engineer, Ian Barfoot, who provided 4 stereo subgroups to both the FOH and Monitor consoles, which took pressure off the engineers and provided a better audio balance within the Orchestra.

The main FOH system consisted of an Allen & Heath iDR10 modular MixRack loaded with 64 inputs – 56 analogue and 8 digital – connected to an iLive-80 Control Surface with a mixture of analogue and digital local outputs.

There was an EtherSound digital split to the Monitor system, which comprised an iDR0 miniRack connected to an iLive-112 Control Surface with 24 analogue local outputs.

The orchestra system included of two iDR10 MixRacks loaded with 128 inputs – 120 analogue and 8 digital – running in ‘DualRack’ mode, feeding 16 digital outputs – 8 digital feeds to the FOH system and 8 to locally required outputs – with 16 analogue outputs as back up.

All the MixRack and Control Surface connections, except the monitor system, were via Gigabit Network Smart Switches with fibre optic interfaces over deployable tactical fibre cable.

WiFi networks were installed on all of three iLive systems to allow remote access to control functions via iLive’s Editor control software. All the iLive systems and network interfaces were powered via UPS units for protection from variations and interruptions in the temporary AC supply.

“Everything worked according to plan,” said Barfoot. “iLive is still one of the best sounding, most intuitive digital desks around, which is why it was chosen. With the added flexibility of ‘DualRack’ mode, the channel count is doubled per system without compromise, making the choice of iLive even easier.”

“After the event we received a lot of compliments from the artists taking part who remarked on the quality of the monitor sound, and to the best of our knowledge there were no complaints from the crowd regarding any issues with sound or coverage.”

“We would definitely do it the same way again – the combination of good input sources with an excellent mixing console makes every ones job much more simple.” 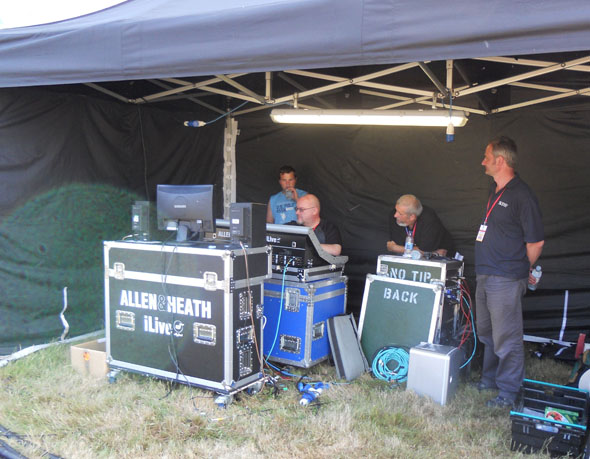