All Access: Modern Audio For A Classic – Crosby, Stills and Nash 2009 Concert Tour

For the second year, Crosby, Stills and Nash is touring with a QSC WideLine-10 line arrays that take less than a quarter of the truck space of the previous loudspeaker system.

The extensive Crosby, Stills and Nash tour this year began in Europe, returning to the U.S. late in July in support of Demos, a collection of 12 previously unreleased tracks recorded between 1968 and 1971. We caught up with them at the St. Augustine (Florida) Amphitheater.

Sound for the tour once again being supplied and supported by Sound Image, and for the second consecutive time, the Escondido, CA-based sound company is providing QSC WideLine-10 line arrays that occupy less than a quarter of the truck space of the previous loudspeaker system.

The 11-inch tall cabinets travel on 6-foot high set-carts that each hold two columns of six facing each other, making it quick and easy to fly an array of a dozen boxes.

For larger venues, like the 15,000-seat Jones Beach Amphitheater in New York, they use 18-box arrays.

WideLine’s 140-degree horizontal coverage makes it a great match for typical outdoor venues that might otherwise require out-fill arrays to cover the wider zones of the audience.

The system’s XTA GQ600 graphic EQ has minimal cuts between 160 and 2,000 Hz, partly due to the fact that the St Augustine Amphitheater has a Span Systems tent that covers three-quarters of its 4,000 red plastic seats.

A pair of QSC SC28 system controllers work with the WideLine-10 main line arrays, which are configured in a number of ways, depending on venue.

The SC28 is easy to use, with simple menu adjustments for amplifier sensitivity and for entering the number of boxes and array angles to automatically calculate array correction, providing a system that needs minimal EQ.

The main system also includes JBL VerTec VT4880A subwoofers, driven from an auxiliary on the console and processed with a BSS FDS-366T loudspeaker management system employing JBL Version 4 presets. The tour carries transition frames that allow ground-stacking up to eight WideLines on top of the VerTec subs. 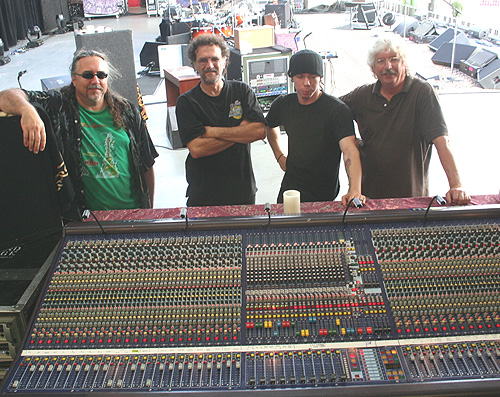 In keeping with the classic vintage of their artists, both mix engineers use analog consoles. For the main system, Gregory Hancock mixes on a 48-channel Ramsa SX-1, which has fabulous preamps and EQ plus 10 VCAs and differential summing buses, and is the newer, bigger brother to the classic WRS 840.

“Great sounding EQ and great preamps – that’s what matters to me,” Hancock comments.

Outboard effects consist of a version 2 Lexicon PCM-70 used with a rich chamber for vocals, a Yamaha SPX-1000 on snare, a dual machine TC Electronic M-5000 with its 480 Hall on vocals and its Rich Chamber on acoustic guitars, plus an Eventide H3000 used with Rich Chorus.

Mark Frink is a touring sound engineer who has mixed monitors for numerous top artists.
All Posts
Top Stories
Explore All Live Sound