Dedicated to encouraging the entry of students into the profession of audio engineering, the Audio Engineering Society Educational Foundation announces that it is now accepting applications for the annual AESEF Graduate Studies Grants and Mary Lea Simpson Memorial Scholarship.

Offering multiple opportunities for applicants to receive financial backing during their studies, the AESEF continues its mission to promote audio education for aspiring audio engineers.

Included in the grant offerings are scholarships honoring Larry Estrin, Ilpo Martikainen, Tom Kite and Bruce Swedien, as well as grant awards in memory of John Eargle and Emil Torick, all valuable industry contributors. Since its establishment in 1984, the Foundation has awarded grants for graduate studies to hundreds of exceptional applicants, many of whom have gone on to prominent and successful careers in the audio engineering industry.

The Mary Lea Simpson Memorial Scholarship
This scholarship of full tuition for final year of studies, is being offered to an undergraduate student entering senior year at a North American college or university Audio Engineering/Recording Arts Program. The scholarship honors Mary Lea Simpson, who was a graduate of the Audio Production Program at New England Institute of Art when she died suddenly in 2013 in a tragic building collapse. Deadline for applications is June 1. 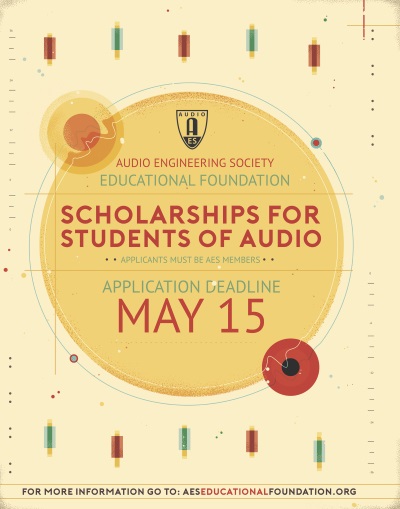 Grants, including the named Scholarships, are awarded annually for exemplary students dedicated to the art and science of audio engineering. The AESEF Scholarship Committee selects the recipients of the memorial scholarships based on which student best meets the specification for each named scholarship. Application deadlines for AESEF grants is May 15.

The John Eargle Award
This award honors AES Past-President and Fellow, John Eargle, who authored several seminal textbooks on audio, as well as engineering more than 250 CD releases, and was posthumously awarded a Technical GRAMMY Award in 2008. This scholarship is given annually to a student who excels in both technology and music.

Genelec Dr. Ilpo Martikainen Audio Visionary Scholarship
Coinciding with its 40th anniversary in 2018, Genelec announced the creation of a scholarship honoring its innovative and entrepreneurial founder. The Genelec Dr. Ilpo Martikainen Audio Visionary Scholarship is offered annually to U.S. graduate students in the field of audio engineering who are members of the Audio Engineering Society and have a passion for advancing audio through innovation and technology development.

Advancing Audio – The Tom Kite Scholarship
This scholarship honors Kite’s legacy of dedication to engineering excellence in audio and audio measurement, as well as his achievements within the AES and as Vice President of Engineering of Audio Precision, the scholarship’s sponsor. The scholarship is offered to students who have a passion for advancing audio through innovation and technology development.

Bruce Swedien Scholarship Fund
This fund was established as a way to say “thank you” for Swedien’s many celebrated contributions to the industry and to help aid young recording engineers who believe in putting the “Music First!”, as is his mantra.

The Emil Torick Award
This scholarship honors the former long term AES Foundation president and founding member, awarded annually to an outstanding student with exceptional career goals. Torick held 16 patents and authored more than 60 technical publications He served on the National Radio Systems Committee and was a member of the U.S. delegation to the International Radio Consultative Committee in Geneva.