A Whole Lot Going On: Computers And Interfaces At Front Of House

How various engineers approach the tasks to get the job done

As I delved into the subject, I was struck by how various front of house engineers approach the tasks to get the job done and was surprised to find that computers were not always their first choice for every chore.

On The Record
There are often two processes that happen simultaneously when recording a live show: a “stereo’ reference and a multitrack recording. Recording the event for reference is sometimes done using a laptop, while recording multiple channels for possible live release is usually done via a transformer isolated split or direct from the console using a dedicated recorder.

Jon Burton (The Prodigy, Radiohead): “I’ve a portable ‘go with me everywhere set-up’ using a Zoom H4N 4-track compact recorder that allows me to record a stereo ambient track with the built-in mics along with a stereo desk-mix via the XLR inputs. I also have a (JoeCo) BlackBox 24-track recorder that usually sits at the stage splitter box to record individual channels, or on occasion it will be at front of house, where I send it sub groups and a few key channels on the direct outs.” 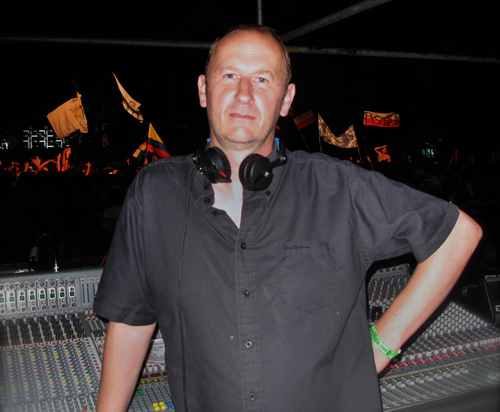 
Eddie Mapp (Evanescence, Stone Temple Pilots) notes that he employs a very similar setup, while Jon Garber (The Band Perry, Rascal Flatts) uses a slightly different approach: “When we record the show, we use a Pro Tools HD rig through an Avid HD MADI interface right out of the console. We also record a 2-track mix on CD every night.”

When asking about backing tracks, I discovered that multi-channel playback systems are rarely employed at FOH. Instead, many major touring acts employ a dedicated playback engineer that is back stage, cuing tracks, adding a ‘bigger sounding’ production to the stage.

This, I think, makes tremendous sense when you consider that fans go to shows expecting to hear production levels that approach what they hear when they listen to their favorite CDs at home. Most playback systems incorporate a couple of dedicated hard disc recorders along with a backing track switcher to ensure the show will proceed without a glitch, should the digital source fail.

Testing Un, Deux, Trois
A few weeks ago, I had the opportunity to hang with Brad Madix (Rush), and during the show, I noticed that he was monitoring the sound using a 360-degree mic array connected to his laptop. The laptop was being used as a multiband audio analyzer, displaying sound pressure levels at the various frequencies. 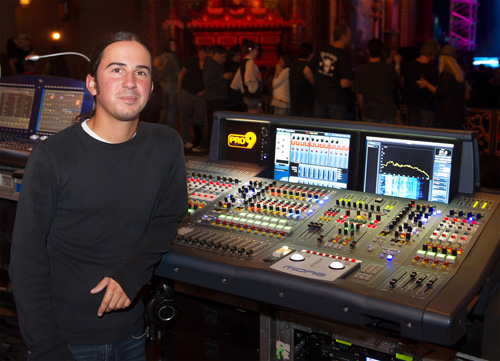 As a result, I figured it was worth asking around to see what other folks are using and once again, the approach differs greatly. Dave Natale (Rolling Stones, Lionel Richie) says he likes to keep things simple: “I use an Alesis Masterlink to play back my trusted Sheffield Labs, James-Neton Howard and Friends disc.”

James Towler (Steve Windwood) simplifies the process even more with an iPod as his sound source, and Doug Short (Megadeth, Van Halen) told me, “I use (Rational Acoustics) Smaart with my Mac and sample the room from 3 to 5 locations.”

Garber typically samples from two locations, while Mapp goes all out: “For testing I use a Roland Octa-Capture (USB) as my interface with Smaart 7 and then do all of my system tuning within a Meyer Galileo 616 AES. This gives me eight measurement inputs with one reference, two wireless, console PFL, FOH mic, plus three more hard-wired mics if needed.”