A User’s Guide to Hearing

The design and care of an audio professional's most valuable tools.

The final part of the ear mechanism is the inner ear, which contains a bony labyrinth that houses two key mechanisms: the vestibular system responsible for our sense of balance and the cochlea that converts sound vibrations into nerve impulses.

The cochlea comprises three liquid filled ducts (tympanic, cochlear and vestibular) separated by two membranes (Resissners and basilar) that span the entire length of the curved structure of the cochlea.

The organ of Corti (which spans the length of the basilar membrane) detects these specific displacements and sends an electrical signal along the auditory nerve to the auditory cortex of the brain as a neural message. 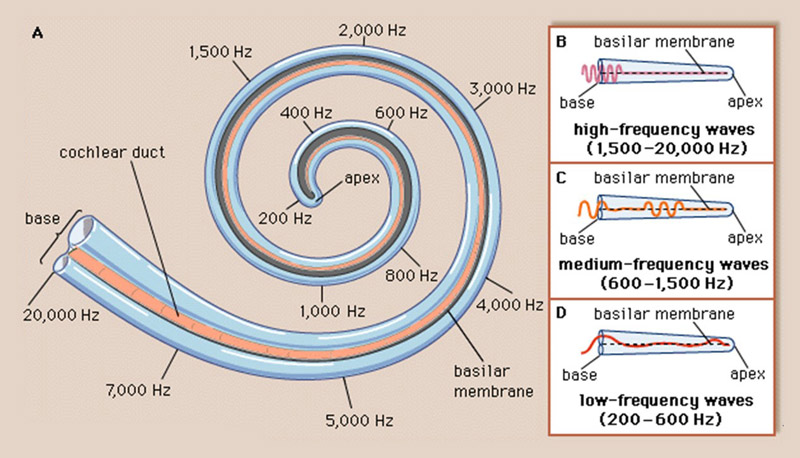 And this is where the actually hearing happens as our brains make sense of the nerve impulses arriving from both ears in real time. This happens 24 hours a day, seven days a week – our ears never really turn off, they’re always on, ready to alert us to any potential threats. It really is a truly remarkable mechanism, but any mechanism this complex is bound to be prone to faults. So what can go wrong?

By far the biggest issue is Noise Induced Hearing Loss (NIHL), which, as it’s name suggests, is damage to the mechanism of hearing as a result of exposure to loud sound.

This can manifest in various ways, such as a general impairment of hearing perception, a loss of perception of a specific band of frequencies, or the hearing of a persistent sound when no sound is present (most commonly a ringing sound, called tinnitus, but it can be a clicking, hiss or roaring sound).

It can happen gradually, as a result of regular exposure to loud sound, or suddenly from a short high-intensity sound such as a gunshot or an air horn.

The key to preventing NIHL is simultaneously being aware of noise levels as well as exposure times, and thanks to wide ranging legislation on the subject, we have plenty of accurate data to draw on. A baseline figure agreed almost universally is that levels below 85 decibels (or dB) are considered safe.

The Center for Disease Control (CDC) and the National Institute for Occupational Safety and Health (NIOSH) have published figures stating that exposure time at 85 dB should be no more than eight hours. Further, exposure time is halved for each doubling of sound energy (i.e., an increase of 3 dB), which gives us this chart: 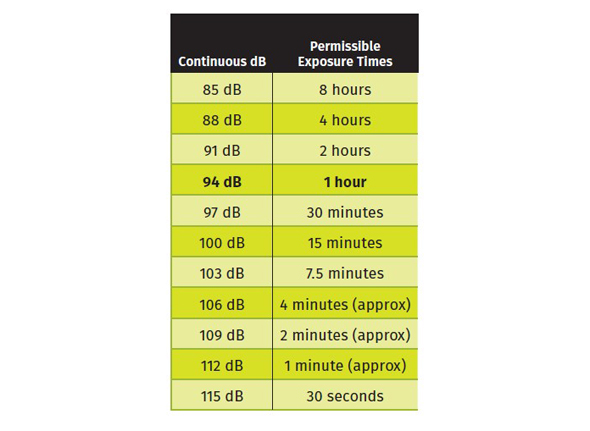 I’ve highlighted 94 dB because it’s a handy figure to remember (as the recommended exposure time is one hour), but how can we tell how loud things are?