A User’s Guide to Hearing

The design and care of an audio professional's most valuable tools.

Of all the tools at the disposal of the sound engineers, our ears are probably the most important yet also the most overlooked.

Much like any other tool it helps to fully understand how they work to get the most out of them and ensure a productive working life – because if they break, that’s it, we can’t just go out and buy a new pair.

Ears are transducers, devices that receive signals in one form of energy and convert them to another. In this case, vibrations are converted into electrical signals which are then interpreted by the brain.

Microphones perform a similar job; however, no mic exists that can come close to the frequency response and dynamic sensitivity of the human ear, which explains why we use so many different mics to capture a wide array of sound sources.

The thing we call the ear is just the external component, a specific arrangement of skin and cartilage called the pinna. It acts as a parabolic reflector, amplifying and focusing sound waves into the ear canal, and it also serves as a filter that affects the frequency content of the sound depending on which direction it arrives from, thus aiding in the localization of sources.

The other thing that aids in localization is that ears come in pairs. We can detect the most minute differences in the arrival time of sounds to each ear, which, together with the filtering provided by the pinna (and the head itself), enables us to pinpoint sound sources with startling accuracy.

Once sound is amplified and focused by the pinna, it enters the ear canal, a slightly bent tube about 1 inch in length and 0.3 inch in diameter, at the end of which is the ear drum. The deep embedding of the ear drum keeps this sensitive mechanism safely protected from external interference – imagine what would happen to your favorite mic if the diaphragm were openly exposed.

The ear canal secretes a yellowish substance called cerumen (also known as ear wax), which cleans and lubricates the canal as well as providing protection from bacteria, fungi and insects. The ear drum itself is a thin cone shaped membrane about 0.4 inches in diameter that moves in response to external vibrations and transmits these vibrations to the mechanism of the middle ear. 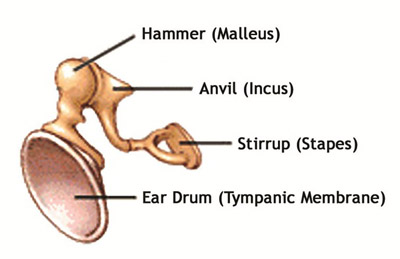 The middle ear is an air-filled cavity inside the skull containing three tiny bones called ossicles that directly couple sound energy from the ear drum to the oval window of the cochlea (more about this a bit later). These bones are known as the hammer, anvil and stirrup, so named for their shape. (By the way, the stirrup is the smallest bone in the human body at about 1 inch long.)

The relative sizes of the ear drum and oval window, in combination with the mechanics of the ossicles, means that signals traveling through the middle ear are amplified by a factor of almost 20. Such amplification is necessary because the cochlea is liquid filled and thus more energy is required for sound waves to travel through such a medium – this gain is actually a natural form of impedance matching.

However, due to the nature of the mechanism of the ossicles, the amount of amplification is not equal at all frequencies, peak efficiency is achieved at 1 kHz, which in combination with the transfer function of the middle ear, gives our ears peak sensitivity between 1 kHz to 3 kHz. It’s no coincidence that these are key frequencies for the intelligibility of human speech.

At the base of the middle ear is the Eustachian tube, a narrow passage that links the cavity to the back of the throat. In its natural state this tube is collapsed, but it opens in response to both swallowing and positive pressure. Its purpose is to ensure that the air pressure behind the ear drum is the same as the external pressure in the canal, because if the pressure differs, the drum distorts, resulting in mild discomfort and hearing impairment. 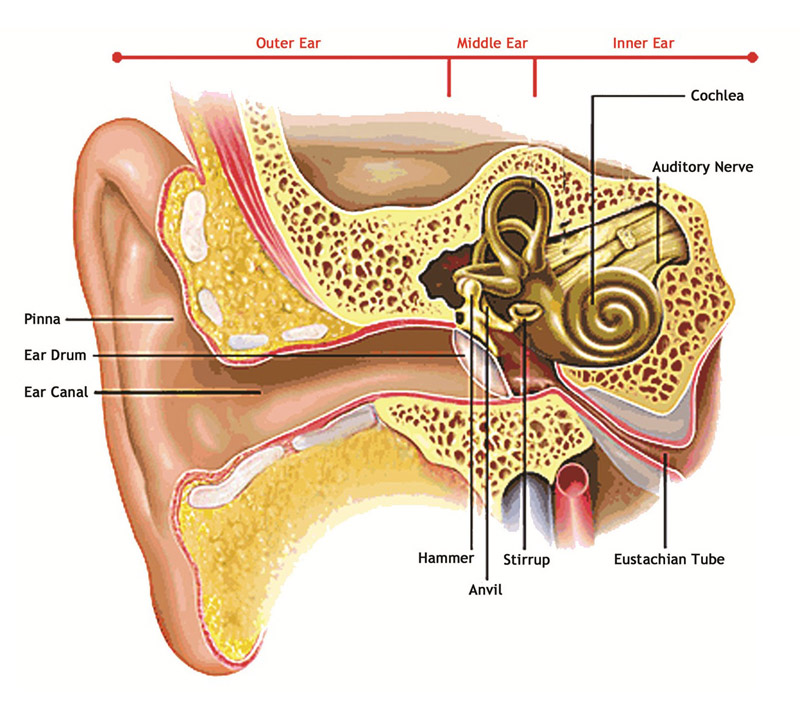 Anyone who’s flown in an airplane has experienced this phenomenon – as the plane gains altitude, the air in the middle ear expands and pushes the ear drum outwards, while as it descends, the air in the cavity shrinks, pulling the ear drum inwards. The normal mechanism of the Eustachian tube can’t keep up with these rapid changes in pressure so active opening is often required to equalize the pressure (i.e., closing the mouth/nose and blowing).

Andy Coules is a sound engineer and audio educator who has toured the world with a diverse array of acts in a wide range of genres.
All Posts
PrevPreviousNextRadioTV Deploys Riedel MediorNet Routing Solution
NextChurch Sound: The Intentional TechNext
Study Hall Top Stories
Explore All Study Hall