The Jefferson Theater has been around for almost 100 years, and it’s a safe bet that it’s never sounded better thanks to a new sound design and reinforcement system to serve a steady stream of live performances by national and regional rock/pop artists.

The new incarnation of a venue that began as a host to vaudeville acts and silent movies in 1912 in downtown Charlottesville, VA is the brainchild of Coran Capshaw, who as the founder of Red Light Management manages Dave Matthews Band, Tim McGraw, Trey Anastasio, and many others.

The rejuvenated Jefferson Theater, several years in the making, is now another gem in the crown of the Charlottesville Downtown Mall, a European-style open-air city center with a host of other first-rate music venues, including the Pavilion outdoor amphitheater, the Paramount renovated classic theater, and the Southern, a 200-seat venue offering an intimate concert setting.

All of these venues have more in common than their location, incorporating sound reinforcement systems and other production elements designed and installed by Stage Sound.

The Roanoke, VA-based pro audio company, headed by Reid Henion, also provides a host of other services such as turnkey lighting and video system packages.

Stage Sound enjoys a 20-years-plus history of collaboration on a variety of projects with Capshaw, and that was furthered with the Jefferson Theater. It was a process that took nearly five years from start to completion.

“In 2005, Coran asked me to have a look at this old rundown theater with him,” Henion notes.

“We sat in the seats, stood on the stage, and brainstormed what might be possible in such a space. Stage Sound was the first contractor involved. Since then, the project has seen several different teams of architects, a few consultants, and a lot of contractors.

“As with many projects, this one evolved from lots of people’s differing visions for the primary uses of the space,” he continues. “At one point, the theater was to be both an opera house in the summer and a bar/music venue in the winter.” 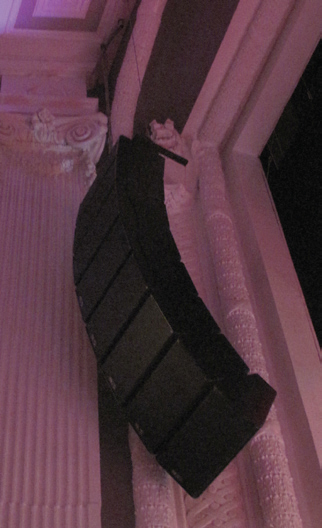 One of the NEXO GEO Tangent Arrays flying at the Jefferson Theater.

In addition to new sound and lighting systems, the building also underwent significant renovations, including restoration of original architecture wherever possible, structural and electrical upgrades to accommodate the new systems infrastructure, new central air and heating systems, and much more.

Starting With Quiet
The performance room of the Jefferson Theater, with a total audience capacity of 800-plus, is a “tall box.”

A proscenium stage fronts a large main floor listening space (standing only, no seating) that measures about 50 feet wide.

The floor eventually gives way to two raked, asymmetrical balconies at the back of the room.

The high ceiling has some domed characteristics, and parallel wall spaces and hard reflective surfaces abound.

Further, a lot of the surfaces adjacent to the planned location of the house loudspeaker arrays at the sides of the stage proscenium are angled such that they would destroy intelligibility, particularly with respect to coverage for the first balcony.