Overcoming feedback problems while keeping house and monitors in balance.

One of the most challenging tasks confronted by a sound engineer is amplifying orchestral instruments on a loud stage.

Problems abound, including bleed, resonance, feedback… oh, and frustration! It’s important to first understand the environment before dealing with the challenges.

When in a “classical” concert hall, orchestral instruments such as violin, cello or upright bass are usually miked with omnidirectional condenser microphones. Omnis are particularly effective at producing a natural sound as they do not focus their attention on a particular area of the instrument, but capture a larger area that includes the bow, strings, F-holes and so on.

During classical concerts, feedback is usually not a concern because the PA system is only used for “sound reinforcement,” and sound pressure levels rarely exceed 90 dB.

However, problems set in when a louder group, such as a rock band, joins the stage.

Drums, electric guitars and bass generate significant SPL, which in turn must be compensated for by turning up the stage monitors. The sound generated by the orchestral instruments is lost. To compensate, one can either try close miking the instruments using a directional cardioid mic that attaches to the instrument, or by using some form of piezo pickup.

The cardioid mic can work reasonably well, but is not without issues. It only captures the sound from a specific area, which may or may not sound “right.” And because it’s still a “microphone,” it will inevitably pick up sounds from adjacent instruments, the house system and the monitors.

In order to hear themselves on stage, the violins ask for more sound from the monitors, and next thing you know, here comes feedback problems. Things can get even worse when playing outdoors, where feedback due to room acoustics is replaced by wind noise and levels are increased due to lack of room acoustics. These factors can lead engineers to use alternatives such a piezo electric transducers.

“We ruled out miking the strings pretty early on, having experimented a little with small mics in proximity of the drums and deciding we were going to get as much snare in the mic as violin,” Madix notes. “All of the players were on IEMs, so even if we did mic the strings in order to provide a proper mix to the band (not to mention the audience), we would have to additionally use contact mics. A combination of mics and pickups might have worked, but in the end we decided to go strictly with pickups.” 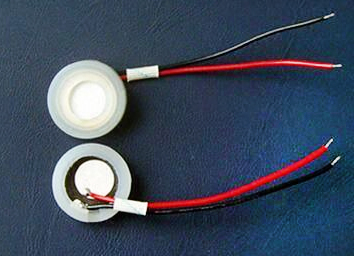 A piezo is a contact pickup that captures the vibration of the instrument. It’s typically connected to a preamplifier of sorts and the signal is processed like a mic. But anyone who has tried a piezo pickup will tell you that for the most part, they do not sound all that great.

They tend to sound peaky, and with violin, they can sound shrill. The problem us not so much the piezo transducer, but the way it is loaded.

In researching this problem at my company, we discovered that when you apply the typical load of a mixing console –- say 10 k-ohms on a piezo -– it causes the bass and high frequencies to roll off, narrowing the response and generating peaks in the mid range. As you increase the load, it begins to flatten out.

For years, electronic manufacturers have employed a “one size fits all” 1 meg-ohm input impedance as a means to satisfy as many sources as possible. (We can attribute this to Leo Fender, as the typical input impedance on his tube amps is 1 meg-ohm.)

As the impedance rises above 4 meg-ohms, the response extends and flattens out further and seems to really sound great at around 10 meg-ohms.

“We knew that impedance matching was going to be a problem right from the get-go, and we just wanted to get the signal into the console without mucking it up by mismatching the impedances,” Madix says. “I thought we were going to have to have something custom made, but Peter told me that Radial was working on a possible solution.”

That solution was the PZ-DI orchestral instrument direct box. To maximize signal handling and reduce distortion, the PZ-DI incorporates a DC-to-DC switching supply that converts the phantom power to provide extra headroom, which in turn supplies more dynamic range.

“Our first tests in Toronto prior to the tour with the PZ-DIs were impressive,” Madix says. “The pickups required some EQ –- I would say ‘the usual’ –- but the frequency response was great, as were dynamic range and signal-to-noise… there were none of the issues that become apparent when impedances are mismatched. We had the players come in and listen to the tracks afterwards, and they were really impressed.”

But increasing the load for piezos is not without challenges. As you increase the load, signal-to-noise increases. Careful attention must be paid to the circuit that buffers and amplifies the minute signal. 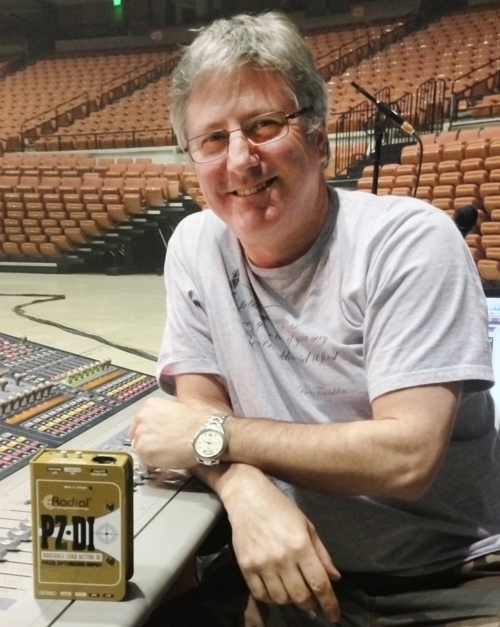 Brad Madix with a Radial PZ-DI that he employed for the Clockwork Angels 2013 tour. (click to enlarge)

And if you want to use the same DI for a magnetic pickup, the opposite problem arises: applying a 10 meg-ohm input impedance to the magnetic pickup on an electric bass makes it sounds glassy and lacks warmth. This is addressed with a 3-position load switch to set the unit at 220 k-ohms for magnetic pickups, 1 meg-ohm for traditional loads, or 10 meg-ohms for piezos.

Properly loading the piezo transforms the device into a truly functional transducer. However, there can be too much bottom end, so we added a variable high-pass filter to the PZ-DI that eliminates excessive bass.

In general, high-pass filters are probably one of the most important and under-used controls that a sound engineer can employ. Cleaning up excessive resonance eliminates low frequency modulation and enables the various instruments to better sit in the mix, making it easier to balance them as a whole.

“The band is really happy with the sound of the strings,” Madix states. “The composer, David Campbell, was impressed as well. He said it was one of the first shows where you could really hear the instruments and it sounded quite natural.”

A final note: one more important factor to account for in this scenario is that many classical artists get nervous about attaching mics and piezos to their expensive, often vintage instruments. So great care must be taken.

Be sure to evaluate instrument mounting kits carefully—some are fine, while others can possibly produce scratches. Piezos typically employ a double-sided tape that will not harm the finish, so it’s another factor in their favor.

Over the course of more than four decades, the late Ken DeLoria tuned hundreds of sound systems, and as the founder of Apogee Sound, he developed the TEC Award-winning AE-9 loudspeaker.
All Posts
PrevPreviousDiGiCo Handles ESPN’s First-Ever VR Live Stream Of X Games
NextCheck One, Two: A Primer On Sound Check (And More)Next
Study Hall Top Stories
Explore All Study Hall