A British Equipment Invasion On The Killers Concert Tour

Delicate Productions of Camarillo, CA provided equipment for the U.S. leg of the tour, also working with British sound company Capital Sound, a partnership that sees both companies working together on two continents.

Alan Behr, Audio Crew Chief and Delicate Productions employee, explains, “We have a very similar inventory. In the past, a lot of the acts that enjoy this level of production over in Europe would come over to the US and find very similar attitudes and compatible people with Delicate. We work a lot of shows the same ways. It’s a great relationship to have – hopefully we can do a lot more work with them.”

Main PA
The system featured a DiGiCo SD7 digital mixing console at Front of House and a DiGiCo D5 at stage left for monitor mixing. 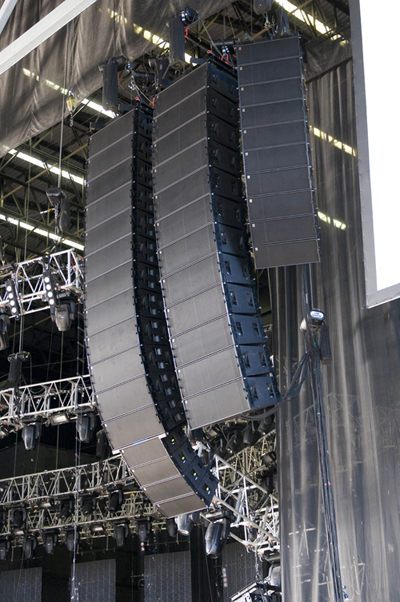 Martin Audio line arrays in place at a shed for The Killers on tour. (click to enlarge)

“Due to the number of inputs (80 in total), there are two stage racks for each console and two Whirlwind snakes,” notes Behr. “In order to cut down on setup time, the four stage racks and the two snake splits were combined into one rack.

“All the cabling is done every day, and all that remains is to pull out the feed from the stage. Since that was already done, we decided to put all the monitor amplifiers in the same frame.”

It allowed them to roll out everything with all console inputs and outputs ready-formed together. “When you pull out the loom for the stage, it sits right in the tray on top of that cart. It speeds things up substantially,” Behr adds.

The main PA was headed by Martin Audio W8L Longbow line arrays, touring the U.S. for the first time. The main hang consisted of 24 W8L modules, while low frequencies were handled by 24 flown Martin W8LS subwoofers.

Downfill was supplied by Martin W8LCD, 4 boxes per side, with a side hang of up to 24 Martin W8LC. Everything was powered by Martin MA4.2 amplifiers.

Read More
Navigating A New Direction: Putting Together The Audio Production For A Series Of Drive-In Concerts
Pages: Page 1, Page 2
1 2Next »