3 Techniques For Miking An Audience

Audience recording is both the key and the problem with live recording...

If you’re recording a live performance, then you want to pick up some of the audience to make it sound realistic. Here are some techniques and considerations culled from the latest edition of my Recording Engineer’s Handbook.

“Audience recording is both the key and the problem with live recording. It’s sometimes difficult to record the audience in a way that captures its true sound. The transient peaks of the audience makes it not only difficult to capture well, but to isolate from the stage mics as well.

Miking the audience lends itself to using omnidirectional mics, but shotgun mics can be especially useful because they help attenuate the intimate conversations from the crowd that happen around where the mic is placed. In the event you have neither type of microphone, just make sure that the mics that you use are identical models and don’t forget to engage the low-frequency rolloff switch if the mic has one.

Mic placement outdoors is a lot more difficult because you have nothing to hang microphones from to get enough distance over the crowd. For another thing, you don’t have the ambience of the venue to help you out so you usually have to resort to more microphones as a result. Don’t forget the windscreens, because nothing makes a track unusable like wind blasting across the mic’s capsule.

Many engineers are tempted to use stereo recording techniques such as spaced pairs, X/Y, ORTF and Blumlien, but these can actually return some poor results when it comes to crowd recording. What these setups do is capture the ambience of the environment and a perfect stereo picture, but your primary concern is just to capture the audience. They’re two different beasts and have to be handled that way. 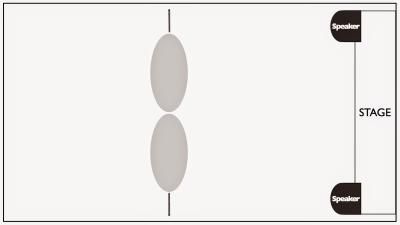 It’s very easy to have audience microphones overload either from the stage volume of band or the peaks of the audience response. Therefore, it’s a good idea to heavily compress or limit them to prevent overload.

Technique #1: Place a pair of identical mics at about the half-way point between the edge of the stage and the back wall of the venue. Make sure that the mics are placed at least three feet above the audience. Start with the microphones facing directly at one another across the audience, then aim them both down towards, but not exactly at, the middle of the audience.

Please Note: The higher you get the mics over the audience the better, but if you’re in a club with a low ceiling in a club, you’re better off with placement closer to the audience since the reflections from the ceiling can sometimes sound pretty bad. 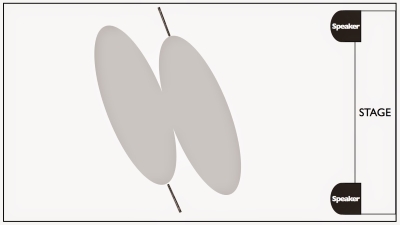 Variation: If you only need a mono audience track, splay the mics off-access. This configuration can result in a fuller sound in mono, but will result in a stereo track that’s off balance since one mic is pointed closer towards the stage and the main sound system than the other.

Technique #2: In a club, hang a couple of mics at about the middle of the venue pointing directly down from the ceiling. This is where omnidirectional mics come in handy. Be sure to hang each mic the same distance from the stage as the other if you want a balanced stereo image. 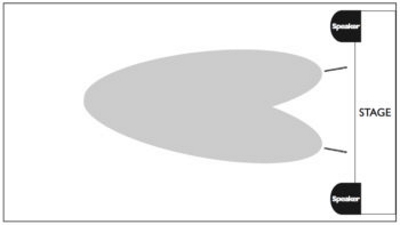 Technique #3: Directly in front of the stage, place two identical mics between the front-of-house speakers and pointed at the middle of the room. The trick is to find the null point in the house speakers, where you can hear them the least and the low frequencies are at their weakest.

Variation: Use two mics pointing toward the center and two toward the side. This technique works great when you just can’t find anywhere secure to place microphones in the crowd. If there’s a balcony, aim the mics at the farthest seat instead of the middle of the room.“
There are a number of other techniques for recording the audience that can be found in the book.

You can read more from The Recording Engineer’s Handbook and other books on the excerpt section of bobbyowsinski.com.

Bobby Owsinski is an author, producer, music industry veteran and technical consultant who has written numerous books covering all aspects of audio recording. To read more from Bobby, and to acquire copies of his outstanding books such as The Recording Engineer’s Handbook, be sure to check out his website at www.bobbyowsinski.com.
All Posts
Top Stories
Explore All Study Hall