Marking a sound reinforcement milestone that leads to where we are today, joined by some interesting perspective...

Back in 1915, the first World War was raging across Europe, Charlie Chaplin’s film “The Tramp” was released, Babe Ruth hit his first career home run, the one millionth Ford car rolled off the assembly line, the first stop sign appeared in Detroit (that can’t be a coincidence), and Billie Holiday, Orson Welles, Les Paul, and Frank Sinatra were all born.

Towards the end of the year, on December 24, a Magnavox PA system was deployed to amplify a Christmas carol concert on the steps of San Francisco City Hall for an estimated audience of 100,000 people, the first recorded example of an electric PA system being used to amplify a musical concert. That was exactly 100 years ago this month.

In geological terms 100 years is a blink of the eye, but in modern history a lot can happen technologically and socially in that time frame.

Driven By Voice
The development of PA systems didn’t happen because of any overriding need to amplify music, that drive simply didn’t exist at the time. Music was invariably written to be performed in a particular space with a specific ensemble that augmented specific instrument groupings to achieve the appropriate volume and mix. The birth of public address was driven more by the need to amplify the human voice and enable the addressing of larger crowds – the clue is in the name.

Prior to this point public speaking was an area of serious discussion and study by academics, thinkers and even future presidents – John Quincy Adams published his book “Lectures on Rhetoric and Oratory” in 1810. By the middle of the nineteenth century, elocution books were popular to the extent that almost every middle class home would contain at least one volume. Aside from advocating chastity, temperance and religion, these books also included physical and breathing exercises as well as vocal exercises designed to increase the volume of the voice. It’s no coincidence that the devices invented to convey sound at high volume became known as “loud speakers.” 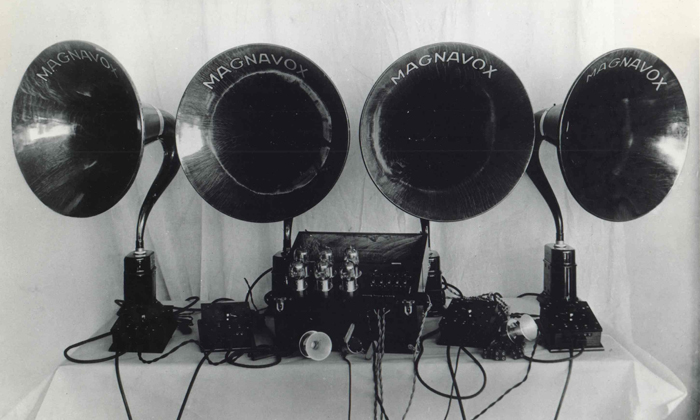 Pretty much all of the technology utilized in those early PA systems was invented for a different purpose. The microphone was invented for use with the telephone, the vacuum tubes that powered the early amplifiers were developed to amplify radio signals, and while various loudspeaker-like devices existed on the telephone, the phonograph and the gramophone, the true moving coil loudspeaker was developed for wireless telegraphy (i.e., Morse code transmitted by radio).

Our understanding of how the ear works has changed a lot in the last 100 years. In 1915 we had a pretty good understanding of the mechanism of the ear, thanks to various scientists (most notably Alfonso Corti and Hermann von Helmholtz) but we didn’t have a very firm grasp of how we hear.

It took Hungarian biophysicist Georg von Békésy to get to the bottom of this great mystery. He developed a method for dissecting the inner ear of human cadavers which left the cochlea intact and enabled him, via strobe photography, to observe the basilar membrane moving like a surface wave when stimulated by sound. From this he was able to discern that different frequencies excited different sections of the membrane, thus stimulating different nerve fibers in a way that was registered by the brain and perceived as sound. This discovery lead to him being awarded the Nobel Prize in Physiology or Medicine in 1961.

The first research on how the ear hears different frequencies at different levels was conducted by Harvey Fletcher and Wilden A. Munson and published in their 1933 paper “Loudness, It’s Definition, Measurement and Calculation.” In 1937 they created the first equal loudness curves, which were subsequently updated by D.W. Robinson and R.S. Dadson in 1956 and became the ISO 226 standard (which was updated again in 2003).

Andy Coules is a sound engineer and audio educator who has toured the world with a diverse array of acts in a wide range of genres.
All Posts
PrevPreviousAmple Firepower: Large-Format Line Arrays
NextRenkus-Heinz Announces Resignation Of President Roscoe AnthonyNext
Study Hall Top Stories
Explore All Study Hall